CPU profiling is not a new concept and has been around for decades. However, with advancements in profiling techniques and a push towards observability, profiling is today seeing a steady rise in adoption.

Profiling helps you understand code-level performance and optimize the resource-consuming parts of your code. You can also profile your application to perform root-cause analysis.

Traditionally, since profiling introduced a lot of overhead to be run on production systems, it was more of an ad-hoc process, only done for root cause analysis and to look for specific issues. But with the advent of eBPF-based profiling, continuous profiling of your applications is now possible with very low overhead.

In this post, we’ll see how to use gProfiler to profile your entire server including both the user and kernel stack.

You’ll see your unique User API Key and steps to run the gProfiler Docker container. The gProfiler agent will pass this API key as a token to authenticate to Granulate’s backend. Just Enter the Service Name as “gprofiler-demo,” and you’ll see the Docker run command being generated for you.

Next, replace the token and service-name parameter according to the previous step, then run the agent with the following command:

You should see the following output:

You can also confirm if the agent is running by issuing a docker ps command, after which you should see a container running.

Now, go to your dashboard and navigate to the Profiles tab, where you should see a flame graph for your server. 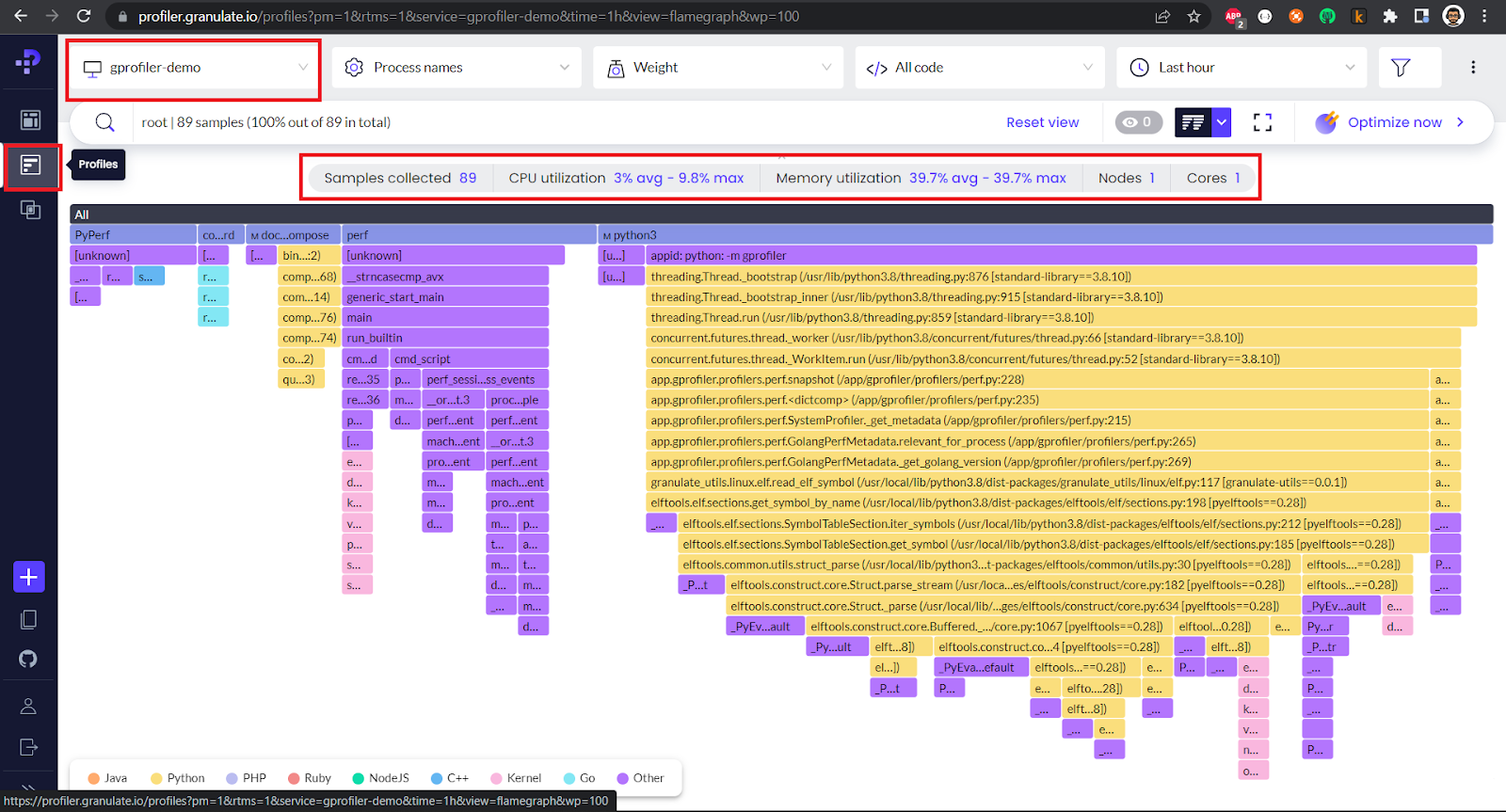 A few things to note on the screen:

Note: Your flame graph might look different based on the processes you have running on your machine.

Next, click on the Process Names drop-down to see all the processes running.

Currently, the only applications running on our server are the Docker engine (containerd), Docker Compose, our gProfiler agent container, and associated profiler.

But let’s now zoom in a bit on our flame graph.

You can see there’s a flame for each of our processes. The width of the flame shows the amount of CPU time being used by that process. The python3 process is the widest of all, which means it’s consuming the most CPU at the moment.

Each frame represents a function call, while the different colors denote the different languages of each call frame. Yellow is for python calls and pink for kernel calls.

You’ll note three stats being shown. You can hover over any  frame, and you’ll see the same three stats:

We can inspect even more frames below this.

Turns out, the last frame (which is a kernel frame) is the one consuming 2.25% of the CPU time.

That’s how you can drill down for each process and see which frame is consuming the most CPU time. If this was a real application, the frame hogging the most CPU time would be a good candidate for optimization. Conversely, if you were seeing bad performance in your application, you would look for the widest frame in your app’s flame graph to find the one causing bad performance.

The gProfiler lets you change the time range for which you can analyze the graph.

The dashboard also has a table view, which shows the information in tabular form if that’s easier for you to understand. Just use the Table View button to switch.

You can also see stats in tabular form for each stack you saw in the flame graph.

We can even filter this view for a particular process or time frame. Meanwhile, Service Overview gives you details of CPU and Memory usage over time.

Before we move on to deploy a sample Scala application and see how flame graphs can help us find poorly performing code, let’s take a look at some of the salient features of gProfiler based on our demo so far.

In the next section, we’ll deploy a Scala application with a CPU-hogging regex; we’ll then analyze the flame graph and find out which frame is causing the issue.

So, we have a small program that searches for a regex pattern in a large corpus of text. The issue with the application is that the search function is hogging a lot of CPU and performing badly. We’ll analyze the app’s flame graph and try to figure out which part is actually taking up CPU; then, after finding and fixing the problem, we’ll see how our flame graph changes.

So let’s get started.

We have a small snippet of Scala code that basically applies a regex filter to a large string corpus. In this example, we’re using the entire text of Shakespeare’s Hamlet from here. Then, we’re gonna try to search the string HAMLET in the entire corpus and print the number of matches a million times.

Once we run the code below, we’ll see the flame graph for it:

From the flame graph generated, we can see that the majority of the width (hence CPU) is being used by our program. You can even check the Service Overview chart and see that 100% of the CPU is being used.

Let’s zoom in on our process now. Click on the stack of our app to zoom into the flame graph of just our application.

You can see that the majority of the CPU is spent executing our Scala code. Also, if you look further, you’ll find that our lambda expression for filtering is taking a good chunk of CPU (~40% of total process time), which should not be the case.

Let’s see if our code can tell us why this is happening. Upon closer inspection, you’ll see that we made a mistake in our code. We’re compiling a regex pattern inside the loop, which means the pattern will get compiled in every iteration.

Let’s move it outside the loop block and rerun the code to see if anything changes:

After moving the regex creation out of the loop, you can see that the CPU utilization has dropped significantly. And the width of the flame is now significantly smaller than the previous version.

Zooming even more into the flame, you’ll see that the flame for the execution of our loop has also gone down in width. And the giant lambda expression stack is narrower now, pointing to the fact that moving the command out of the loop has improved overall CPU utilization. In the optimized code, the lambda expression is consuming only ~10% of CPU time as opposed to ~40% in the unoptimized version.

This is how we can use flame graphs to identify bottlenecks and pinpoint the places in our code causing those bottlenecks.

You can also share the flame graph with other team members by clicking on the three dots in the top right corner. Moreover, you can download the flame graph in SVG format to share via email or message apps (e.g., Slack, Teams).

To recap, we’ve learned how gProfiler uses sophisticated techniques like eBPF to achieve low-impact continuous profiling. We also saw how continuous profiling is actually better for production systems, as it allows you to proactively discover places for optimization in your applications before they start impacting your end users. We learned how to read flame graphs and interpret them to figure out hotspots in your applications. In the example we used the flamegraph to find the issue in the code and fixed it to reduce ~30% CPU utilization. Lastly, we saw how you can invite other team members to access the gProfiler dashboard in real time or simply share exported flame graphs.

Having a continuous profiler like gProfiler in your observability stack can really help you proactively optimize your application, which in turn elevates the user experience and overall resource utilization.